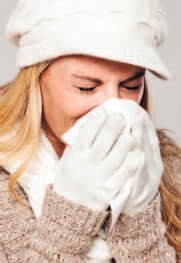 The miracles of the human body are on continual display each day. Even involuntary actions, such as sneezing and shivering, help our bodies function optimally.

Every time we breathe in foreign particles, sensors in our noses and sinuses detect this, and signal the cilia (hairlike structures that line the nostrils) to sweep mucus and trapped debris upward to be eliminated. We constantly produce mucus – about four cups a day on average. The mucus is either swallowed, pushed out through the lungs, or sneezed out. The sneeze produces a burst of air which neatly clears the nasal passages, almost like pressing the reset button on your computer. For almost 16 million Americans with chronic sinusitis, however, the mucus is the problem. As reported in the Journal of the Federation of American Societies for Experimental Biology, researchers discovered that people with chronic sinus issues are not able to ‘reboot’ and clear the mucus from their nose, causing them to sneeze more often, with ineffective results. Post-nasal drip occurs from the additional mucus, which drips continuously down the nose or throat of sinus sufferers, according to Harvard Health Watch.

The brain is constantly monitoring, responding and adjusting to stimuli. Shivering and yawning are two automatic and subconscious regulatory body functions controlled by the brain. When the surface of the skin gets chilled, receptors send signals to the brain, which activates the body’s warming reflexes. Shivers occur when the muscles in your arms, legs and jaw contract and expand quickly. As one of nature’s best defenses against hypothermia, shivering is the body’s way of producing heat within the skeletal muscles in order to maintain a core temperature of 98.6°F.

Surprisingly, the true function of yawning might also be to maintain correct temperature in the brain, not to get more oxygen, as previously assumed. The human brain works hard, and tends to heat up more than other organs, according to Smithsonian Magazine. When you yawn, the gulp of air produced travels up to the nasal and oral cavities, and increases the rate of blood flow to the skull; inhaling at the same time brings cooler blood to the brain. This explains why we yawn more frequently at bedtime or upon awakening, as brain temperatures are highest before falling asleep, decline during the night, and rise rapidly in the morning.

Triggered by a variety of unrelated events – from the chill you feel after leaving warm water or when entering an overly-air-conditioned restaurant, to watching a horror movie, or even hearing the national anthem – goose bumps are a physiological reaction to both emotion and cold temperature. They result from a contraction of muscles attached to your hair follicles, creating a shallow dimple on the skin surface and making the hair on your head, arms and legs literally stand on end. This gives your skin a strong resemblance to that of plucked poultry. Caused by the subconscious release of the stress hormone, adrenaline, add goose bumps to the sweaty palms, trembling hands and stomach butterflies many experience during strong emotions.

Hiccups are involuntary contractions of the diaphragm that occur when the vagus nerve, which runs from brain to abdomen, becomes irritated. There are many causes, from digestive disturbances to sudden excitement. As you inhale with each spasm, the opening that permits air to pass through the voice box snaps shut, creating the characteristic “hic.” From the literally hundreds of home remedies suggested for eliminating hiccups, the NY Times recommends: taking a deep breath and holding it, gargling with ice water, putting pressure on the eyeballs, or the tried-and-true method of breathing in and out of a paper bag. Mayo Clinic recommends contacting your physician if you have hiccups consistently for more than 48 hours.

Don’t take them for granted: however common, each yawn, sneeze, shiver, goose bump and hiccup represents a small medical marvel.