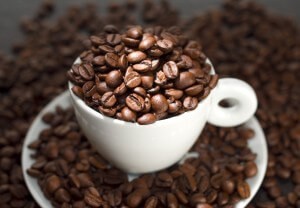 If you are among more than 50% of Americans who drink caffeinated coffee daily, you may be confused by the roller coaster of studies that highlight caffeine’s benefits one day and outline risks the next day.

Caffeine is both a naturally derived and synthetically-produced substance that stimulates the central nervous system. It is found in coffee, teas, sodas, some energy drinks and chocolate, but has no nutritional benefit. Genetic make-up, age or body size may determine your sensitivity to the effects of caffeine.

Most physicians agree that an acceptable amount of caffeine is approximately 250-300 milligrams (mg) per day, about one to two 8 ounce cups of coffee. Be aware—all “cups” are not created equal. At Dunkin Donuts, a small coffee is 10 ounces, McDonald’s is 12 ounces and a Starbucks “tall” is 12 ounces. Strongly brewed coffee or tea does contain more caffeine. Staying within these limits for most healthy adults poses no health risks and may actually offer some health benefits.

Recent studies appear to have found benefits to moderate consumption of caffeine, including a reduced chance of developing Parkinson’s disease and perhaps Type 2 diabetes (absent other risk factors). The Mayo Clinic cites studies that moderate coffee intake may reduce asthma symptoms and gallstone formation. Caffeine may also offer some protection against liver disease.

As a stimulant, it is widely known that caffeine increases alertness for several hours, which is why many people enjoy a cup of coffee in the morning or why students might drink caffeinated beverages while studying. When too much caffeine is consumed (more than 500 to 600 mg daily), it becomes counter-productive and even those with minimal sensitivity may feel its effects. Insomnia, nervousness, restlessness, irritability, shaky hands, heart palpitations and upset stomach can result from excess consumption. Caffeine can stay in the body anywhere from five to 15 hours. Avoiding caffeinated products in the late afternoon diminishes the stimulant effect by bedtime, enabling a better night’s sleep. If needed, it is advised to gradually reduce caffeine intake to avoid withdrawal symptoms such as headaches and drowsiness.

Caffeine amounts vary in food and beverages, so check labels or product websites. Below are common foods and beverages containing significant amounts of caffeine, and the estimated range per 8 ounce cup serving:

Recent studies have shown that most harmful side effects of caffeine are generally limited to people who ingest too much or are highly sensitive to it. This should ease the minds of moderate consumers. If you think you may be consuming too much caffeine, this should be a topic for discussion at your next medical appointment.